Cards of the Boardgame: The PC's 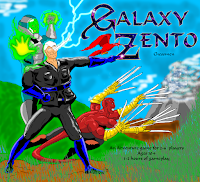 I've tried doing a video series called Card Talk, to show how the cards work in Galaxy Zento the board game. Sadly, I just don't have good lighting or a location conducive to making the videos right. So it's time to go the blogspot way.

PC means Player Character. During game setup, each player is dealt a PC at random. Each PC has specific strengths and weaknesses. Fortunately, you can build on the weaknesses if you're even slightly lucky. The game has 6 PC's (but more are on the way) so let's go over them. First a quick explanation of the symbols/stats:

Star: This is the PC's attack modifier. When ever a d20 is rolled for an attack, this number is added to the result in order to reach the target's defense.

Shield: This is a PC's defense. The number that has to be reached on a d20 roll for a hit.

Speech Bubble: This is the recruitment ability. Possible allies have to be recruited with a d20 roll. This modifier is added to the result to reach the recruitment number on an ally's card (shown in the same symbol).

Arrow: This is the modifier for evading enemies. Basically sneaking away from conflicts instead of fighting. This is also done with a d20 roll compared to the requirement on a character or creature card in the same symbol.

Not all abilities have symbols. There are modifiers for Spells (if the PC can use them at any time), Traps (to escape them) and Obtain for grabbing mystical artifacts (which are not the same as items). As a note, I will tell you that there are powerful items coming that will require an obtain roll.

So on to the 6 PC's that you can play in GZ. (Click on images for better view)

WIZARD: Why not start with possibly the coolest of the bunch? As you can see, the Wizard is not a hand to hand combatant. He gets no modifier for combat. His defense is low, so you'll want to get him an ally as soon as you can or items if you can find them. Where he becomes a super power is that he is the only one of the six who starts out able to use spells. Spells come from their own deck and get drawn at the beginning of your turn. You don't have to reveal them until they are put into play. The Wizard's modifier for spell use is a 10, making any combat he uses spells in, much better. If he attacks a PC with a spell, there's a good chance he'll hit. And he can be at a comfortable range to do it. As an added bonus, unlike anyone else who gains magic use, he can draw 2 spell cards for his turn instead of 1. When he wins combats with spells, he gets an extra achievement token (used as wild card modifiers where ever you want).

PSYCHIC: The Psychic has decent numbers because, well, being psychic has it's advantages. She's excellent at recruiting allies or avoiding trouble with enemies. She's average at dealing with traps too because she can "see" her way around them. Where she's really great is her special ability. Once per turn you may look at the top card of any deck. You may put that card on the bottom of the deck. You can use this ability to give yourself a chance at a better draw for for your turn, or to prevent the person after you from getting a cool card that happens to be on the top of the deck. If you gain spell use, you can use this ability on the spell deck for yourself. But, you can also use it to mess up spell draw for someone who can draw them. You can only use this trick on your turn though, so use it wisely.

STRONGMAN: The brute of the game. He's good in combat, and that's really about it. He gets a great modifier against beasts and monsters along with gaining an extra achievement token for winning combats with beasts and monsters. Don't be too quick to dismiss him. With his head start in combat (which is extremely important) he only gets better from there as you find things to build him up with. Thanks to his bonus, he's also one of the best PC's to have against a beast called The Monstrosity. We'll get to those later though.

SOLDIER: Extra good at combat, average at recruit and evade, but makes up for it as soon as you give him a weapon item. Modifiers from weapon items give him an extra +2.  His defensive power of +2 attack and defense if attacked by another PC makes him a thorny target. The bigger he gets, the meaner that becomes.

SPEEDSTER: Arguably, the most awesome stats of the game. Super speed is super cool. She gets awesome attack and defense stats and her evade is monumental. A +3 to movement doesn't hurt either. She can either keep far away from PC's that would attack her OR stay close to those she wants to target.  Check out her "disarm" special ability. Once per turn, during movement, you may make an attack roll on an adjacent opponent. If successful, steal 1 item from that player. Continue your movement. So, basically, you're running along, pause next to someone, snag something from them, and run away. How annoying can you be with that?

INVENTOR: Another PC who really doesn't start out as a combatant. He's good at recruiting help and is a master with traps. Giving him items is also awesome. With him, the +4 from a laser rifle becomes +8. Then his attack shoots up to a +10. His tinker ability is also very handy. During your turn, you may discard an item to take any item (not artifact) from the discard and put it into play for yourself. You also don't roll to obtain items (which will be more useful with upcoming expansions).


I'm happy to report that the first expansion for GZ will have 18 new PC's to really spice up your gameplay possibilities. I'll do a report on them later on, when closer to release.

To see more of what this board game is about: go HERE.  To catch the books that the game follows, click on my Author's page link in the upper right.
Posted by David Wilde at 10:08 AM

Add blog to our blog directory.